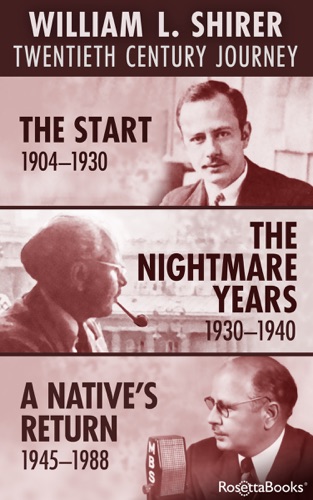 Now in one volume: the three-part autobiography from the National Book Award–winning author of The Rise and Fall of the Third Reich.

The former CBS foreign correspondent and historian provides an invaluable look back at his life—and the events that forged the twentieth century.

The Start (1904-1930): In the first of a three-volume series, Shirer tells the story of his early life, growing up in Cedar Rapids, and later serving as a new reporter in Paris.

The Nightmare Years (1930-1940): In the second of a three-volume series, Shirer chronicles his time in Europe as Hitler dominated Germany and began one of the most dangerous conflicts in world history.

A Native’s Return (1945-1988): The most personal of the three volumes, this edition offers an honest look at the many personal and professional setbacks Shirer experienced after World War II ended—and delivers a fascinating take on the aftermath of the war.

“Mr. Shirer stirs the ashes of memory in a personal way that results in both a strong view of world events and of the need for outspoken journalism. Had Mr. Shirer been merely a bland ‘objective’ reporter without passion while covering Hitler’s Third Reich, this book and his other histories could never have been written.” —The New York Times

“Included in Shirer’s well-wrought narrative are such little-known events as the trials of American broadcasters who propagandized for the Third Reich during WWII, as well as such more familiar matters as the McCarthyism of the 1950s. The author’s comments are refreshingly unfettered by self-consciousness . . . A fine, fitting conclusion to an important work of autobiography.” —Kirkus Reviews