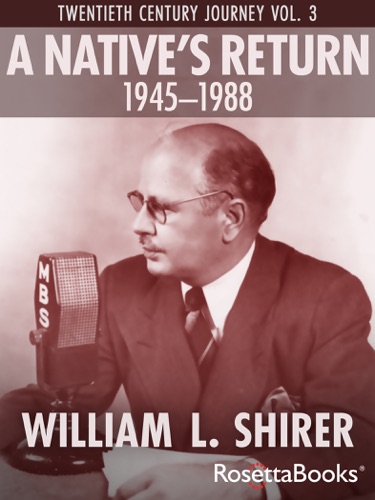 The prominent journalist, historian, and author—an eyewitness to some of the most pivotal events of the twentieth century—tells the story of his final years.

In the last book of a three-volume series, William L. Shirer recounts his return to Berlin after the Third Reich’s defeat, his shocking firing by CBS News, and his final visit to Paris sixty years after he first lived there as a cub reporter in the 1920s. It paints a bittersweet picture of his final decades, friends lost to old age, and a changing world.

More personal than the first two volumes, this final installment takes an unflinching look at the author’s own struggles after World War II—and his vindication after the publication of The Rise and Fall of the Third Reich, his most acclaimed work. It also provides intimate details of his often-troubled marriage. This book gives readers a surprising and moving account of the last years of a true historian—and an important witness to history.

Επάγγελμα Γονέας; Πανεύκολο! by Ρένα Ρώσση-Ζαΐρη - Ώρα για Ύπνο - Εκπαιδεύστε το Μωρό σας να Κοιμάται μέσα σε 7 ημέρες by Violet Giannone - Ζακέτα να Πάρεις! by ΑΝΔΡΕΑΣ ΚΟΝΑΝΟΣ - 5 Days to a Perfect Night's Sleep for Your Child by Eduard Estivill & Rachel Anderson - How to Talk So Kids Will Listen & Listen So Kids Will Talk by Adele Faber - Χαρούμενη Μαμά=Χαρούμενα Παιδιά by ΘΕΚΛΑ ΠΕΤΡΙΔΟΥ - The Danish Way of Parenting by Jessica Joelle Alexander & Iben Dissing Sandahl - The Book You Wish Your Parents Had Read (and Your Children Will Be Glad That You Did) by Philippa Perry - Secrets Of The Baby Whisperer by Melinda Blau & Tracy Hogg - Γονείς για πρώτη φορά by Κώστας Στοφόρος -